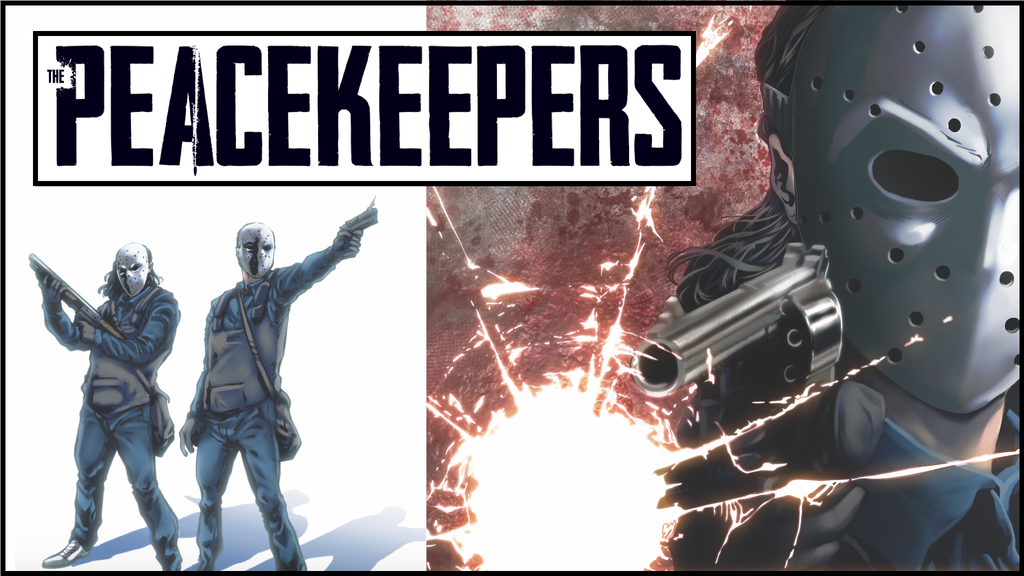 Good day yesterday! We are inching closer and closer to that $10K milestone. Print reveal coming soon! And I've got some FUN here for you today...

Today, I've made available as an Add-on, the PopCultHQ- Exclusive BANJAX #1  Ringo Awards/Demon in a Bottle homage variant!

Banjax, of course, was nominated for BEST SERIES at this year's Ringo Awards (along side Bitter Root, Black Hammer, and Something's Killing the Children). Well, this year’s nominees for Best Cover Artist (Fabio Alves), Best Colorist  (Edson Ferreira), and Best Letterer (HdE) put this little variant together to celebrate. It pays homage  to the iconic IRON MAN #128 – “Demon in a Bottle” cover created by Bob  Layton. It was a run of just 250. There are precious few of these left. You can snag one here as an add-on for just $15, just click that ADJUST PLEDGE button and make the necessary changes.

These will come SIGNED by me (unless you prefer otherwise)! This will be the first time I've ever signed this cover... so, we got that going for us.

Let me know if you have questions! More to come!

I'll be back here with more craziness tomorrow. Until then... Stay safe!


P.S. - Some friends of mine have some WONDERFUL campaigns going right now and I wanted to take a minute to highlight them...

Damsel tells the story of Bec -  Abandoned as a child by her adventurer father, she has fought her way up  through the ranks of the kingdoms premier espionage agency to become  their top operative. When a Dwarven princess goes missing, it’s up to  Bec to overcome the ghosts of her family’s past and to save the day!

As Bec's mission progresses, she is faced with revelations about her  family history and is sent on a journey of discovery to answer questions  she never knew she had! Along the way we meet colourful characters that  would feel at home in any one of your favourite fantasy stories, albeit  with a very modern twist!

Presented in a soft trade paperback book, this first chapter of an epic fantasy adventure tells the tale of a young quixotic humanoid turtle venturing out in a treacherous, cynical world so he can save the  family farm.


TOMB OF THE RED HORSE

War rises. America falls. As the wreckage  of Air Force One burns, the city of Las Vegas is torn asunder by its  own. The President’s child journeys underground to find his father, but  unknowingly draws closer to the TOMB OF THE RED HORSE.

Something evil pulses below the streets of Sin City. A son, a father,  and the man sworn to protect them both find themselves inside a beating  heart of greed & power. The only thing more horrifying than what  lies inside THE TOMB... is what someone would sacrifice to open it.

TOMB OF THE RED HORSE is a 28-page full color comic that is both a standalone story and the second part of a four part horror series.

This story can best be described as an action adventure/horror story set in the historical timeframe of 1945, centered around the events at the end of World War II, combining real life historical figures such as  Prime Minister Winston Churchill, President Franklin Roosevelt, Vice-President (and later President) Harry Truman, along with fantastical characters such as Dracula and Frankenstein’s Monster, setting them on an epic collision course that will determine the fate of  all mankind.

The story will focus  on the collision course between the heroes of our story, Dracula and  Frankenstein’s Monster, against the most evil monster from human  history, Adolf Hitler.

We crossed the 150 backer threshold last night and the campaign is cruising! I've been swamped with a TV Pilot this week, so I'm a bit behind on making available those rare Aberrant/Banjax variants, but sit tight... I'll have them in the add-on shop later this week. Watch this space!

I did Peacekeepers deep dive with Zack Quaintance that dropped this morning over at the Comics Bookcase. He asked some damn good questions in this interview. We got into thematic and matters of inception. It's a pretty good read. Check it out HERE.

I wanted to share another project making waves Kickstarter right now.  It’s brought to you by Rich Douek, Joe Mulvey and the fine folks at ComixTribe. Now, I write action/sci-fi movies for a living and so, I tend to be really hard on this stuff... but I dig the hell out of this book and I think you will too.

If you haven’t heard of WAILING BLADE, here’s the high-level pitch of this dark sci-fi fantasy series:

Wailing Blade is high-adrenaline fantasy adventure, set in the dark future of mankind. When his father is sentenced to death at the hands of the legendary Headtaker, bandit prince Tychon must find a way to save him, or fall to the Wailing Blade himself.

Basically, if you took a blender and mixed up Masters of the Universe with Mad Max, tossed in a little Conan and lots of Heavy Metal, that’s what’s in store for you in the pages of WAILING BLADE.

And for this Kickstarter launch, the ComixTribe crew is unsheathing one of the coolest foil-enhanced die-cut hardcovers I’ve ever seen.

With super detailed, gorgeous art from Joe Mulvey and a razor sharp script from the writer of Road of Bones, Rich Douek, you really can’t go wrong with this fully loaded collection.

I’m taking the blade, and you should too!

CLICK HERE TO CHECK OUT WAILING BLADE ON KICKSTARTER!

As an added bonus, the ComixTribe crew is contributing the first issue of WAILING BLADE  to our BONUS DIGITAL EXTRAVAGANZA, which was unlocked when we hit 100% funded!

Hope all is well out there! Stay safe!

I am freshly back from at weekend spend online at Baltimore Comic Con Live! It was a packed couple of days, full of fun and chicanery. The highlight, perhaps, came Saturday afternoon... my dear friend David Avallone (Elvira, Betty Page, Drawing Blood) and I did our podcast - THE WRITERS BLOCK - live from the virtual con floor and some first ballot Hall of Famers stopped by... Matt Fraction (Haweye, Sex Criminals) and Stan Saki (Usagi Yunjimbo). That's on top of a lineup that already included David Pepose (Spencer & Locke), Troy Little (Rick & Morty), Drew Edwards (Halloween Man), and IDW Editor Scott Dunbier. It was a bonkers show! A must watch. I promise to have some video for you on Wednesday.

I appeared on the CHEERS TO COMICS Podcast this morning to discuss THE PEACEKEEPERS. Host Brian Wayne also strong-armed me into pitching IDW a pretty badass impromptu COBRA KAI take on air. It's a fun listen. Check it out HERE.

STATE OF THE UNION

Our little campaign is cruising along nicely. I'm really happy with that backer number. More importantly for you guys, we're nearing that $10K stretch goal! Once we cross that threshold, everybacker is going to recieve an incredible print from Davi Leon Dias and Iwan Joko Triyono. This is a really incredible effort from the two of them. I can't wait to show it to you. You're going to love it.

In the meantime, stay safe out there!


P.S. - Some friends of mine have some WONDERFUL campaigns going right now and I wanted to take a minute to highlight them...

MONSTER MATADOR: TANGO OF THE MATADORS #1-2

JUST 30 HOURS LEFT TO BACK ISSUE 2 OF MY ABSOLUTE FAVORITE COMIC BOOK!

THE JUMP artist Fabio Alves recently took over penciling duties on Steven Prince's MONSTER MATADOR. They are currently running a Kickstarter campaign to fund the 2nd issue of their new series.

Set in a near future where monsters appeared suddenly and without  warning, bringing death and destruction. Ramon Alejandro  Estévez-Guerrero roams the earth fighting these monsters in memory of  his late wife and to make a better world for his daughter – he is the MONSTER MATADOR!

It's Matadors fighting Kaiju Monsters. It's TONS of fun. There are plenty of ways to catch up on what you missed. CHECK THIS OUT! You won't regret it!

Chayoma is a medieval epic fantasy series, filled with magic, awesome action, majestic scenes and jaw dropping storytelling. It tells a story of a girl born with special abilities but was coerced into evil by the political deceptions of her own people's ruling class. She must go through several events to understand the gravity of her purpose while a very dangerous plan is about to befall all of the Kitara kingdoms of east Africa.

Chayoma curse of the Jangura is also the story of the  Basoro and the Jangura, remnants of the Bachwezi dynasty also known as demigods, they seek to restore their glory after the great war and return to the celestial plain.

JUST 15 HOURS TO GO ON THIS ONE! CHECK IT OUT HERE!

Early Haunts is a 100-page graphic novel anthology of seminal ghost stories which inspired Sleepy Hollow, Ring, A Christmas Carol Illustrated by some of the most talented horror artists around today!

Check it out HERE.

Mixing familiar aesthetic elements from THE LORD OF THE RINGS with character threads from YA tales such as THE GIVER series and the GRACELING series, WAHCOMMO will appeal to fans of high fantasy from every direction. Filled with classic elements of role playing games such as BALDUR’S GATE, THE ELDER SCROLLS, and THE WITCHER, WAHCOMMO offers an adventure filled with an exciting and unique visual style that mixes comic art with painterly brushwork and the cinematic scope of an animated feature. It's a bold narrative about determining one's own fate and defying social expectations.